Solaris Bus & Coach S.A. has been awarded a contract for the delivery of 88 articulated Urbino 18 buses to the capital of Latvia. It is an extension of the framework agreement concluded in 2013. Public transport operator Rīgas Satiksme has thus taken advantage of the option to increase the original order. The first ten buses are to roll out on Riga streets as soon as next year.

The multi-annual framework agreement concluded in 2013, for the supply of 175 Solaris buses to Riga, assumed the implementation of contractual obligations starting in 2014. So far, the producer has delivered 140 diesel engine vehicles to the operator. The contract signed only now will cover 88 buses, which means that Rīgas Satiksme has decided in favour of the optional right to increase its order from five years ago by 53 vehicles. The first 10 Solaris Urbinos will be ready in 2019, whereas the remainder of the contract shall be carried out by the end of 2020. The total value of the order amounts to around EUR 35 million.

All of the commissioned buses shall be 18 metres long. They will feature 10.8-litre diesel engines with a power of 250 kW and meeting the most restrictive emission norms Euro 6; moreover, they will be equipped with an automatic transmission. Up to 150 passengers can get on one bus in total. In addition the delivery entails fitting the buses with an energy recuperation system. The vehicles will feature a series of amenities both for the bus drivers’ and for the passengers’ sake. Travel comfort, even on the hottest of days, shall be guaranteed by an air conditioning system, whereas the safety of passengers will be ensured by means of a state-of-the-art surveillance system, consisting of 10 cameras placed outside and inside the bus. The passengers will be able to use USB ports to recharge mobile devices; the ordered articulated Urbino 18 buses will be equipped with ITC systems that include 4 communication channels (GSM, WiFi, Tetra and GPRS), as well as with panels, in the driver’s cabin, which, apart from displaying standard messages, will also inform drivers about the pressure and temperature in the tyres, among others.

So far the producer has delivered a total of 528 vehicles to Latvia, 455 of which have made their way to Riga. One of the orders currently implemented in that country involves the supply of 10 trolleybuses with batteries and an additional fuel cell, for driving beyond the traction line.

These are not the only orders carried out by Solaris in Baltic states. The producer is just about to complete the delivery of 150 buses with diesel engines to Vilnius. The supply of another 41 trolleybuses, to the capital of Lithuania, is currently under way. Moreover, the firm recently signed a contract for the delivery of 85 trolleybuses to Kaunas in 2019. 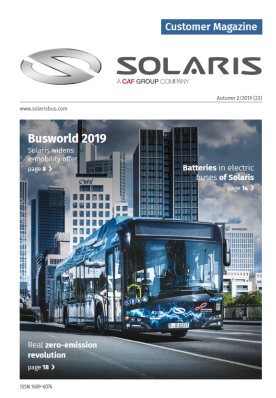