15 electric Solaris Urbino 18 buses will enlarge the fleet of Berlin’s public transport operator -BVG. The first articulated electric vehicles in Germany’s capital city will join the fleet of 20 standard length vehicles which Berlin had ordered in the previous years. The total value of the contract, including charging infrastructure amounts to EUR 13,2m.

BVG, one of the largest operators in Europe ordered a total of 20 electric buses from Solaris between 2015 and 2018, all of a standard 12-meter length. At the end of the second quarter of 2020 they will be joined  by 15 articulated Solaris Urbino 18 electric. Those will be the first articulated electric buses in the capital of Germany.

The energy charging will take place in selected places of the city through the so-called inverted pantograph (lowered from the charging station to the roof of the vehicle) and on the depot, via a Plug-in connection. The vehicles will be equipped with Solaris High Power batteries with a total capacity of 174 kWh. The drive unit will be made of an axle with integrated electric motors. The lighting of the bus both inside and outside will be made using LED technology. The operator decided to order electric heating for the vehicles, and the air conditioning will be equipped with a heat pump.

Buses with the green dachshund logo are very well known to the inhabitants of Berlin. The Polish manufacturer has already supplied over 300 of its vehicles to the city since 2000, including 5 electric ones. Another 15 Solaris Urbino 12 electric will join the BVG fleet later this year. In 2020, 15 articulated Solaris Urbino 18 electric will be delivered. 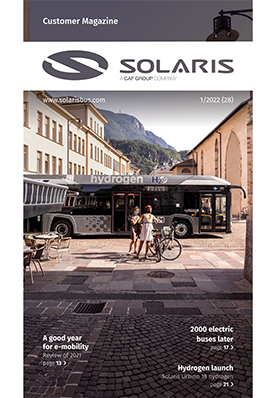