Over the next few days, a Solaris Urbino 12 hydrogen bus will run various routes of the picturesque town of Wels in the Austrian state of Upper Austria (Oberösterreich). The vehicle will be tested as part of the Hydro-Motion mobility project, which is unique to Austria and a result of collaboration between the Austrian state of Upper Austria, the town of Wels, the transport companies Fronius and Solaris, as well as transport service providers Wels Linien, SAB Tours and OÖVV. A press conference attended by all project participants was held today.

On 10 August, in the Austrian town of Wels, a press conference was held to introduce an innovative and completely climate-friendly mobility project. As part of an initiative conducted by the government of Upper Austria (LINZ), a Solaris hydrogen bus will undergo trials on routes in Wels. Co-organised by the local representative of Solaris, i. e. Solaris Austria, the meeting marks the symbolic launch of trials of this model, which will be performed in Upper Austria. The trials of the hydrogen Urbino will last until 20 August 2021.

The event was attended by all project participants. They included representatives of Solaris Bus & Coach, who are responsible for the hand-over of the hydrogen bus and technical support during the tests. Also present were representatives of Fronius International, which provides access to a refuelling station in Thalheim near Wels. Operator Wels-Linien, in charge of servicing the line on which the hydrogen-powered Solaris will run over the next 10 days, also attended the press conference. Sabtours-Autobetrieb has provided drivers and the required licence as part of the project. The event, which was also attended by international media outlets, constitutes an important building block for the state of Upper Austria’s further pursuit of its strategy “E-motion” to develop alternative drives.

“I am extremely pleased that Solaris hydrogen buses are increasingly enjoying interest from Austrian transport operators. Once again we have received an opportunity to demonstrate our hydrogen bus in Austria. The future of mobility is emission-free, and hydrogen technology allows us to achieve excellent operational performance. This commitment by the state of Upper Austria, responsible for the presentation of the demonstration model to local inhabitants, is an outstanding example of how to actively raise awareness regarding alternative drives in municipal transport,” said Anna Mejer, General Manager of Solaris Austria.

The press conference provided an excellent opportunity to present the Solaris hydrogen bus and to learn more about the state-of-the-art technology applied in it. The test rides will allow authorities to assess the performance parameters of the bus and its potential if applied in regular use. So far, it has been demonstrated that a fully refuelled Solaris Urbino 12 hydrogen can cover a distance of about 400 km.

Hydrogen technology is not only a solution for the future. More and more carriers are deciding now to introduce Urbino hydrogen buses into their fleets. Solaris is Europe's leading provider of emission-free solutions for city transport vehicles. Since 2019, when the Solaris hydrogen bus was launched, the manufacturer has landed orders for the model from carriers in Germany, Italy, Austria, the Netherlands and Sweden. Recently, in particular, this state-of-the-art and emission-free vehicle is gaining increasing recognition from Austrian carriers. At the end of May, a conference held in Villach inaugurated trials of the vehicle in the region of Carynthia. According to market forecasts, by 2030 hydrogen-fuelled buses will constitute a substantial percentage of the bus fleet around Europe. 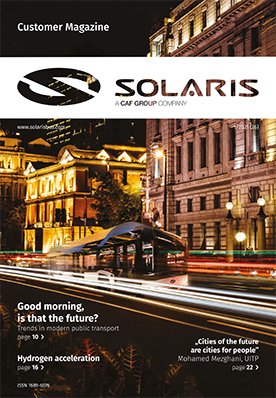