Robert Schneider, the new CEO of Solaris Sverige AB, brings 30 years of vast experience in managerial positions in commercial, logistics and military fields. His recent professional work has been closely related to public transport. Before he became part of the Solaris’s team, he served as General Manager at Arriva and as Product Development Manager at Keolis. Moreover, prior to joining the Swedish subsidiary of Solaris Bus & Coach, Robert Schneider worked for Ebusco, Transdev Sverige AB and Go-Ahead Nordic. He has replaced Klaus Hansen, who is retiring and who had headed the Swedish company since 2014. Robert Schneider assumed his new post as of 6 September.

“I am really glad to welcome Robert to Solaris’s team. Today, we are gaining a highly experienced manager who knows the Swedish public transport market inside out. Congratulations to Robert on his new position! I wish him a lot of success with his new responsibilities”, said Petros Spinaris, Deputy CEO of Solaris Bus & Coach for Sales, Marketing and After Sales. “I believe that with the new CEO our Swedish team will continue to successfully implement our sales plans in this market and actively support local transport carriers in the transition to low- and zero-emission public transport”, he added.

The partnership between Solaris and Swedish operators dates back to 2003. Since then, the manufacturer has supplied its customers in Sweden with almost 700 vehicles, the vast majority of which are low-emission or zero-emission vehicles. In the next few months, the first two hydrogen buses, purchased by operator Transdev, will be delivered to the Swedish city of Sandviken. 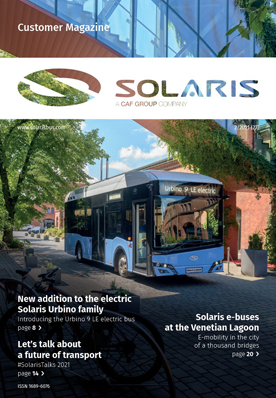